Misleading Lights of Town: a rock songs solid album with a twist

While I’m writing, Vincenzo Grieco’s first original release sounds are filling up the room through the monitors. Finally, some music that is written, played and recorded in total “out of the box” philosophy.

M.L.O.T. features 2 full bands, 6 singers, and both string and brass sections. There’s a lot of energy, wisely conveyed, in every tracks. Melodies play a main role here, such as a narrative backbone for the hard rock/blues/funky arrangements. 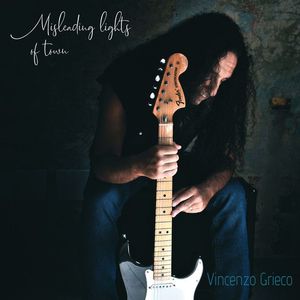 Vincenzo himself describes the songs as his very owns musical journey, where his guitar leads us through intimate notes paths and sound highways. And while the six stringed intrument is the legitimate star of the show, the rest of the musicians are given the right amount of room to move creating tight and solid ensemble results everytime.

The albums opens with the catchy and powerful Crashing Waves,then digs into renewed late 70’s rock atmos with the following (and darker) Don’t Lay Your Love To Waste. After the almost Hendrix-ian Dizzy Heights, the listener lands on 1995, a convincing, melancholy ballad richly arranged  (real string section here – ladies and gents!). The cleverly written and playfully titled That Brand New Perfect Tune steadily shakes the loudspeakers coils, and the same energy flows through the bluegrass style An American In Rome.  Special mention: the title track Misleading Lights Of Town delivers the always classy Grieco’s guitar phrasing within a rich harmonic and melodic interweaving.

Although Vincenzo’s truly inspired guitar touch plays a big role in the production, this is not a record made to show off any instrumental virtuosity and technique is not an end in itself. Every cluster of notes and rhythmic combination is serving the songs – preserving a unique and never obvious flow of music and lyrics.

Misleading Lights of Town is a powerful record, a story told with real passion, impeccable production choices and fine artistic value. And yes, rock can still be surprising and fresh.

Vincenzo Grieco is an Italian guitarist, composer and arranger. He is a well established performer on the Italian scene and a reference point in music education, given his many years of experience in teaching.

His musical endeavours spanned all genres – but he has a solid rock/blues soul. During his 20 years of career, Vincenzo has boosted collaborations with a great number of artists, both in Italy and abroad. He currently performs with the band “Vincenzo Grieco and T.H.E. Rome Blues Authority” and with the Hendrix/Vaughan tribute band “Little Wings”.

He has signed soundtracks and original scores productions for the Italian Broadcasting Television (RAI). For over 20 years he also undertook a successful career in music education through masterclasses and video courses. In 2019 he has released his first original album.

You can pre-listen Misleading Lights of Town here on Spotify  and buy the record  here at Amazon.com  . A Red Cat Production. 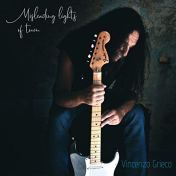